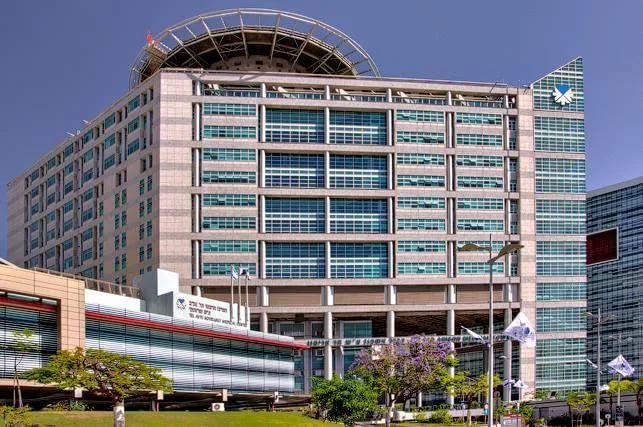 Medium price level
Clinic's services:
Transfer from / to the airport
Help with visa
Personal assistant
Internet
Apartments and avia tickets booking
Translator
Accommodation of an accompanying person
One-man room
Main specialties:
Cardiology Cardiosurgery Dermatology Gatroenterology Genetic diagnostic Neurology Neurosurgery Obstetrics & gynecology Oncology Ophtalmology Orthopedy Pediatric oncology Pediatrics Plastic surgery Surgery
About clinic
Tel Aviv Medical Center Ichilov (Sourasky) is a multidisciplinary medical institution that occupies a leading position in Israel and international medicine, it is one of the recognized leaders in the field of medical tourism. The Ichilov Hospital has a capacity of 1400 beds and consists of 60 inpatient and 180 outpatient departments. It includes the Israeli national centers for adult and pediatric neurosurgery, oncologic orthopedics, radiotherapy and others. It is an academic and research center based at Tel Aviv University, and various scientific studies are conducted here. The team has more than 6,400 employees, including 1,100 doctors, among whom 650 are clinical specialists, 350 occupy academic positions and about 10% have the academic title of professor.
Video about clinic
Best clinic's doctors
Doctor Ben-Gal Yanay
Cardiac surgeon
Work experience: 20 years
Achievements:

Member of several international organizations that specialize in blood diseases. He regularly participates in conferences devoted to onco-hematological diseases. Its developments in the field of treatment of blood diseases are regularly published in various medical journals. He makes the ranking of the best doctors in Israel according to Forbes magazine.

He makes the list of the best doctors in Israel, compiled by the editors of Forbes magazine. He is the author of several dozen scientific works on nephrology.

I want to tell you my story of acquaintance with the hospital Ichilov (Sourasky).

In Russia, I was given a disappointing diagnosis: kidney cancer and the only method of treatment in my city is abdominal surgery with kidney removal (nephrectomy). I had no symptoms of the disease, blood and urine tests were normal, and a tumor with a diameter of 4 cm was discovered by chance on an ultrasound.

I am 44 years old and I refused to believe that I, having a leading healthy lifestyle, can have such a terrible disease. I decided to undergo a diagnosis and, if necessary, treatment in Israel. I sent inquiries to different clinics on the Internet and a few employees from various departments of international medical tourism called me. I chose the Ichilov Hospital (Sourasky) and I will explain why.

My grown-up son accompanied me on a trip. We were assigned with an employee who accompanied us everywhere, sat with us in the queue, got us into the doctor’s office for a consultation. The organization completely fell on her shoulders, I could only obey and do what they say (for that many thanks to her). Without her and without the knowledge of Hebrew, we would definitely have been lost in these labyrinths of the hospital.

Doctor Avi Beri was a very pleasant man, a man of few words, like all surgeons in my view. Unfortunately, he confirmed my diagnosis and suggested two treatment options: tumor resection with a da Vinci robot, or radical nephrectomy with a laparoscopic method. I agreed to the last, because the tumor was located in the center of the kidney, and for my peace of mind it was preferable to have a nephrectomy by laparoscopic method. The next day I went to the hospital, and at 3 o’clock in the afternoon, I was operated on successfully by the doctor Avi Beri for an hour. I recovered from the anesthesia quickly, there was a slight pain in the right side, I have something like boots on my legs there that squeezed the air, pressing lightly on my lower leg to avoid blood clots on my legs. Only 2 small scars are visible (like mosquito bites) on my body. According to the nurse’s words, the kidney was removed from a small incision on the scar left after an appendectomy performed in childhood. The next day my hemoglobin dropped sharply, dizziness stopped after blood transfusions. I was staying in the ward for 3 days, after which I was discharged in good condition. The sensations of severe pain were absent during all these days, it was painful only when they took blood from a vein for analysis, but that’s no big deal.

Impressions from the department of international tourism Ichilov (Sourasky) and from the medical staff are very positive, although no one will take bows before you for paying a lot of money for medical services. I didn’t pay extra money into anyone’s pocket. Everything is organized clearly, competently, and professionally. The very appearance of the medical complex is very impressive: multi-storey buildings made of glass with a helipad on the roof of the main building. It is impressive and surprising – how such architectural beauty was created in such a small town!

My story is not an advertisement, I am an ordinary patient who wanted to share my impressions with you, because I remember very well the moment when I eagerly read into all the reviews of patients from different clinics. I hope my story to someone very useful. Now I am at home in Russia. The operation took place a month ago, I feel good. In six months, I plan to come to Sourasky again for a control examination. Thank you all for your attention!

Ichilov is a huge medical center with the latest equipment, where the professionals of their craft work, who are ready to help even in the most difficult situation. In this hospital, I was replaced by four joints, but during the preparation and during these operations, the doctors found serious problems that interfered with the implementation of almost every endoprosthesis. However, every time the doctors of this hospital found a solution to the problem and all operations were performed without any complications. I am very glad that I chose this particular hospital and my doctor Professor Aaron Menachem who operated me on all four times.

I visited the hospital in March 2015 for examination and then in May 2015 for surgery to remove squamous cell carcinoma of the tongue at the Ichilov Medical Center (Sourasky) in Tel Aviv.

I have never met such attention, attitude, equipment, and conditions in Russia, anywhere!

The department of medical tourism picked up a convenient time and sequence of all procedures. In the laboratories, they masterfully performed all the manipulations during the examination. The results are recorded on a CD, the documents are translated into English. Everything was clearly explained.

The operation was carried out by a team with the magnificent ENT-surgeon Moshe Yuda headed.

Several shifts of nurses were caring of me and bringing back to life. The attitude here is different in principle: it is important for the medical staff not only to do their job, but also to cooperate with the patient – we are equal in the process of recovery by importance! And the issue is not that I paid for the operation. They treat the fellow nationals for free and completely on the same conditions! Attitude to all is the same. The staff bears and forbears. By the way, there are Russian speakers in every shift! Absolutely comfortable, calm, humanely, and very nice.

Many thanks to the Israeli medicine, the Sourasky Hospital (Ichilov), which is able to instill hope, give life, and very carefully treats patients!

I am treating in Ichilov.

I heard many negative reviews from the Israelis themselves (I apologize for such a frankness), but I myself have never been “caught.” Everything that they did there with me was top-notch, very attentive staff, instant response to everything.

Maybe I just was lucky!? I don’t know. But I highly recommend it!

I will try to objectively convey my vision regarding this hospital:

My doctor / surgeon was Mr. Avi Beri. I can judge his approach to treatment and professionalism subjectively by 5 points out of five. Any unnecessary tests and other things have not been assigned. Moreover, according to his recommendations, some procedures and analyzes were replaced during my visit by others. This became clear and necessary after the examination. The treatment plan was 95% saved from the planned one (before my first visit). This preliminary plan was presented to me on the basis of the first data.

As to the money, I spent the amount according to the planned budget. Conditions before and after surgery are quite satisfactory. The purpose of my trip was to get a quality treatment, with the result. If you want to see luxury wards, as far as I know this can be obtained, for example, in Assuta, or in the period after discharge. In no case, I don’t want to say bad about this clinic. Nurses are qualified, attentive, and responsive.

In my opinion, the problem of this department is the speed from addressing to the first visit to the doctor. I mean, when you want to be examined by a certain doctor. Of course, you can do it in the same Assuta, but it will cost other money. I was limited in budget, I could not afford it. In view of this, I would have to go to this clinic through Experts Medical on subsequent requests. This circumstance has allowed to save time, nerves, and as a result money.

I tried so that people who need help in Ichilov could read and avoid mistakes. Thanks Ichilov and the people who work there. Health to you, friends!

After detecting oncology, I immediately decided to go to Israel for treatment. Examination and diagnosis in Ichilov were conducted very quickly, in ten days, plus chemistry at the same time. Then I went to chemotherapy every three weeks. After repeated examination, I was operated on. It should be noted that I did not even feel like a cancer patient thanks to such a good approach. I recommend coming here to everyone who is sick.

Germany
Hamburg
4(3 reviews)
The information on the website epxerts-medical.com is provided for informational purposes only, is not a guide to action and should not be construed as a medical consultation or recommendations for treatment from the site experts-medical.com. All decisions about the choice of methods of treatment and medical care should be made only a specialized doctor after examining the patient's medical situation.
Request callback
Request
Request
Contact doctor
Get treatment price
Free doctor consultation
Contact clinic
Get price
Review
Payment